- June 21, 2016
I’m sitting here writing this on my laptop, on the patio of a rustic farm villa, with a lovely view of the mountains and checkerboard fields, sipping an espresso. Actually, I’ll probably be posting it at a later date, given that there is no internet up here in the lovely quiet hills, no sounds apart from the odd bleating goat and chirping swallow. Yes, it’s the best time of the year again; fieldwork time! I’m allowed to gloat at these surroundings, I’ve endured everything from 2 months sleeping on a floor with no mattress to 3 weeks with no electricity or running water. That means getting washed = a bucket of cold water over the head. But not this year! This year I’m working at a site called Case Bastione in central Sicily. I’m here as a geoarchaeology specialist, but also as a supervisor for our students from Newcastle University. The project is run by Italian archaeologist Enrico Giannitrapani, along with Newcastle’s Andrea Dolfini, and dates from the early Copper Age to Bronze Age, with some later Byzantine/Medieval stuff as well. I’ll write more about the site itself in the next few days, as I learn about it myself!

Having spent the best part of 10 years going to hot and dry places every summer, Sicily is more like the ‘fieldwork’ I’m used to, in a way that working in the UK is not. I think what I mean is that there’s ‘fieldwork’, and there’s ‘travel’. Until 2013 I’d always experienced the two as a combination. In contrast, my recent work in Orkney is fieldwork, but doesn’t feel like travelling; the weather, food, culture, the daily routine, are pretty much the same as home. Working in Sicily is very different from working in the UK. I’m definitely the sort of person that likes the heat, though this week we’ve been sitting between 25-30 which is pretty cool for this time of the year. And oh the food! Needless to say, the catering has been pretty amazing. We’re staying in the small town of Villarosa, and our pottery specialist has family connections with a wonderful local restaurant. In terms of digging, it feels very familiar here. In terms of the sediment and environment, it’s quite similar to the near east. There are lots of dry, dusty deposits, and so full of bone and pottery (though to be fair, in terms of UK archaeology, Orkney is about the only place where you’ll get close to this level of finds!).

This is the first time I’ve been on fieldwork where I’ve been independently in charge of a process, rather than just popping in to take samples as is usually the case. It’s funny how one day you wake up and realise that you actually know what you’re talking about.  I can even teach people how to do this thing, and direct groups of people to do this thing more efficiently! For the past few days I’ve been overseeing the sieving of all the topsoil, along with Newcastle PhD student Raphael Hermann. Not the most exciting of tasks in the grand scheme of things, but it’s been surprisingly good fun. It feels so exhilarating being back in the field, and for many of the students here, this is their first ever experience on a real dig. Their enthusiasm is great to see, and even a bit contagious. I can’t remember the last time I got excited about finding badly eroded bone or a random potsherd from a huge mound of topsoil, but hearing the excitement when someone finds said bit of bone and pot, and watching as they begin to see the difference between worked flint and random rocks, you’re reminded that this is actually quite cool. That being said, it would be more cool to get through the topsoil as quickly as possible so we can get onto the really exciting archaeological layers! 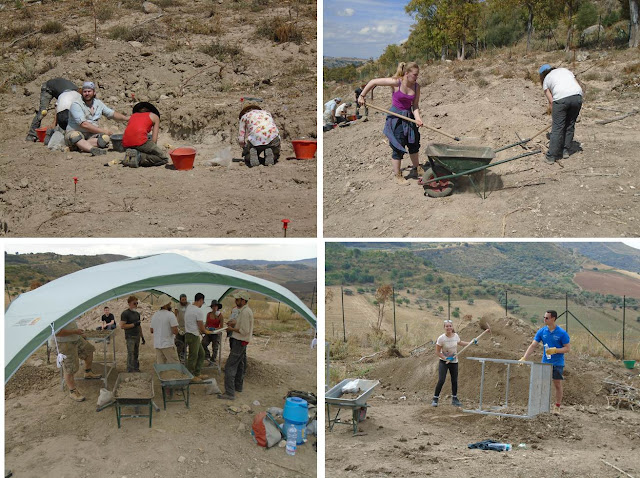