Microfossil of the Month: Discus diatoms 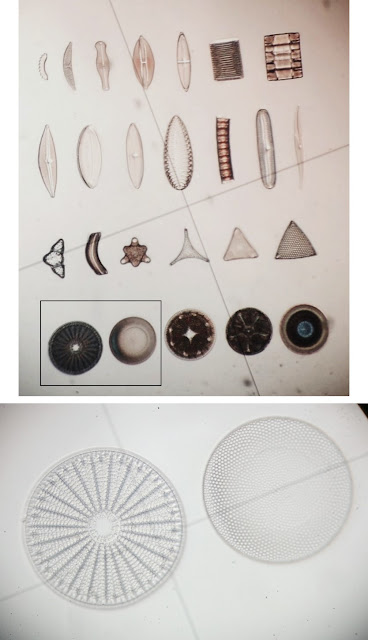 Almost forgot to post a microfossil for November! That would be sad as I've managed to do the monthly micrograph then microfossil posts every month for almost two years now. I've just been so busy with teaching, and the lack of microscope camera makes taking pictures a bit more of an effort than it used to be. Good news is that we do have a new set of microscopes and cameras for the archaeology lab here at Newcastle, hurray! The lab however is located in a different building to my office, so photograph acquisition still requires a bit more planning than it used to. As it is almost the end of 2015 (yikes), I am thinking of a new monthly blog feature, perhaps a thin section of the month, where I show you exciting pictures of whole thin section slides!

But for now, here is something very pretty. Like the sponge spicules I posted earlier in the year, these little creatures are not my specific area of expertise, but they occasionally show up in my phytolith slides. They are little unicellular organisms that produce beautiful silica cell walls (or 'frustules') in all shapes and sizes. They are used in palaeoecological studies to look at things like changing water acidity, as they are very sensitive to local changes in the environment, and work well alongside other techniques such as pollen analysis. There have been very limited applications of diatom analysis in archaeology. The only purely archaeological case study I could find was in Antiquity journal - a study to determine the cause of death of a Neolithic child discovered in a well in Sweden. The diatoms recovered from the well and skeleton enabled the archaeologists to reconstruct the water conditions, and also to determine that the child was alive when they entered the water, as diatoms were recovered from inside the bone marrow. The study screamed 'taphonomy' at me, as it is unclear how the diatoms enter the bone marrow. But apparently the method is used in modern forensic cases, and diatoms in bone marrow are an 'accepted' sign of drowning - diatoms enter the lungs in water during drowning and are deposited around the body from blood circulation. My very brief review of the literature indicates that it is not entirely accepted in the forensic community, and that diatoms are also found in non-drowned cases. Pesky taphonomy.

Anyways, this image is from my diatom test plate - a set of 25 reference specimens. The close up is of Arachnoidiscus ehranbergi (left) and Coscinodiscus oculus iridis (right). What wonderful names, presumably from the Greek for spider and sieve respectively, and Latin discus, and both named by Christian Gottfried Ehrenberg in the 1800s. I chose these two to zoom in on as they remind me a bit of Xmas baubles, and I'm feeling a bit festive.