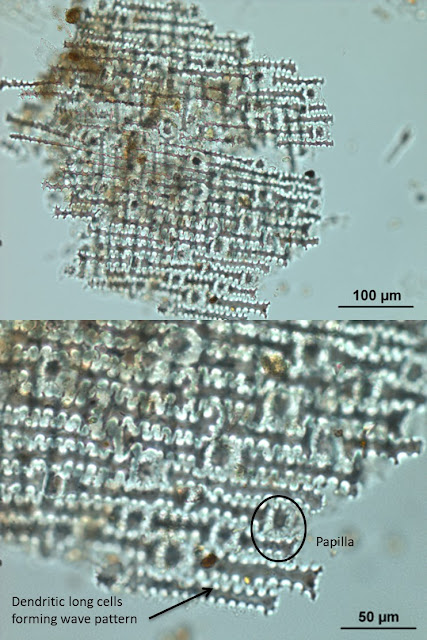 This month's microfossil is a classic, at least within near eastern archaeology. The beautiful little structure you are looking at here is a phytolith from the husk of wheat. A huge area of research in phytolith studies is focused on cereals, and whether cereal phytoliths can be used to identify the genus or even species of cereals, and whether we can distinguish cultivated cereals from wild grasses. This obviously has very significant potentials in studying the origins and development of agriculture. This particular phytolith is from the middle Neolithic levels at Catalhoyuk, Turkey. At this point we have definitive evidence for agriculture from other lines of evidence, such as charred cereal grain stores within buildings. This phytolith was recovered from a midden, and is interesting because of its size. There is a positive correlation between the size of conjoined phytoliths and the availability of water during the growth of the plant. you can see that this phytolith is very large and dense, which suggests it was growing under conditions of high water availability, on silica rich soils, conditions which we know to have been present close to Catalhoyuk.
Cereal phytoliths are interesting microfossils - experiments on modern cereals have shown it is possible to distinguish between different types of cereals, based on measurements of the distinctive 'wave' pattern that is formed by the interlocking long cells, and also the 'papillae' (these are the little circular structures) in the husks.
We do have to be cautious however when dealing with archaeological samples. The measurements that can identify a cereal versus a wild grass for example, fall across a range, rather than being exact numbers and so we need to have relatively large numbers of phytoliths that are big enough and preserved well enough, to allow us to separate a potential cereal from other grasses. This is fine when we have modern samples with thousands of phytoliths, but can be difficult in archaeology where the phytoliths may be broken or only present in small numbers.

Shillito, L-M. (2011) Taphonomic observations of archaeological wheat phytoliths from Neolithic Çatalhöyük , Turkey, and the use of conjoined phytolith size as an indicator of water availability Archaeometry 53: 631 – 641