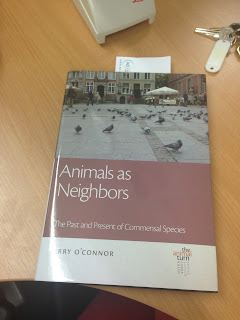 There was a nice surprise in the post for me this morning - a copy of a new book by Professor Terry O'Connor, Animals as Neighbours: the Past and Present of Commensal Species. I contributed an image for one of the figures, of midden deposits built up around Neolithic buildings at Catalhoyuk, Turkey. As O'Connor notes, Catalhoyuk is one of the earliest human settlements to have been colonized by house mice! Not surprising, considering the sheer volume of domestic waste deposits that accumulated in such close proximity to where people were living, and the density of human occupation. This also goes to show how useful it is to integrate different lines of evidence in archaeological research - my own work on middens at Catalhoyuk has shown they contain abundant human and animal dung, which also has interesting implications for understanding human health. Dr Emma Jenkins, who works on the microfauna at Catalhoyuk, has also identified large quantities of digested microfaunal material in burials, and suggests scats containing these may have been deliberately placed there for ritualistic purposes! Despite working there for almost a decade, I still find Catalhoyuk a fascinating place. How different these people were in many ways, but the lives of mice have not changed so much!