Micrograph of the Month: Modern roots

- September 01, 2013
In your sediments, post-depositionally disturbing your stratigraphy. Here we have examples of roots from modern plants that have grown into the archaeological deposits. They are easily distinguishable from archaeological plant remains as the tissue is fresh, organic and well preserved. Photo A shows a root that has grown into soft, ashy, compact midden at Boncuklu, Turkey. You can see clearly the void that has been created from the root's growth, which is the same shape as the root itself (3). We can also see a fragment of shell (1) and some small crushed bone fragments (2) embedded in the deposits. Photos B and C show close ups of modern root from Cesis Hillfort, Latvia. In B you can see where the root is divided into two rootlets whilst C shows the cell structure very clearly. Each of those 'jigsaw' shapes is an individual cell - it is cells like this that become infilled with silica during the growth of the plant, to produce phytoliths. This example of 'jigsaw' shapes within a root is interesting, as jigsaw shapes have been associated with woody dicots, rather than roots - another example of the multiplicity of phytoliths, with similar shapes occuring in diverse plants/plant parts. Photo D shows a root growing into looser, sandy deposits at Biala Gora, Poland. Here the void space is still root shaped (2), but less obviously so than the compacted Boncuklu sediments, which retain their structure better than the sand grains (1). 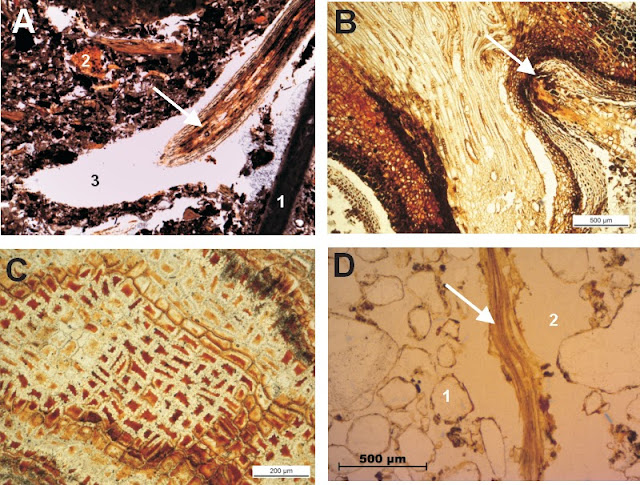