Micrograph of the Month: Water-laid lenses 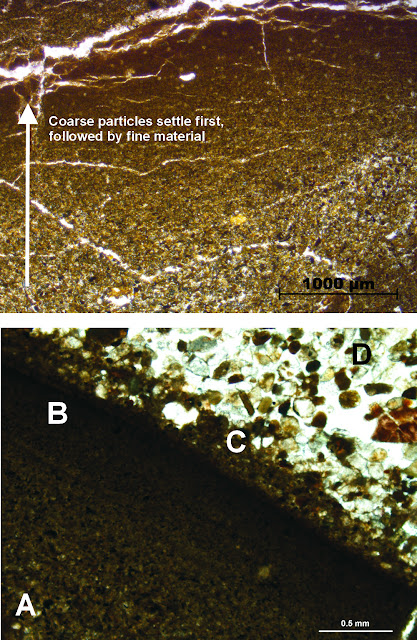 This is an example of where having a background in geosciences can be very useful as an archaeological micromorphologist. Although a lot of the materials that I look at are anthropogenic, there are also many processes occuring that involve natural sediments. In these micrographs you can see some nice examples of water-laid sediment crusts. Water-laid crusts are quite distinctive, and form when an inwash of water carries particles which then settle under gravity according to their size. The coarsest material requires the most energy to stay in suspension, so settles first, and gradually finer and finer particles settle out of the water, creating the banding effect, with the very fine clay particles settling out last. It occurs on a much larger scale in certain river environments wherever there is a change in the energy of the river.

This is the same idea that I was talking about that is used to seperate out the clay fraction from sediments during phytolith processing - the coarser phytolith particles settle whilst the clays stay in suspension for much longer.

These two examples appear quite similar in thin section but are occuring in very different contexts. The uppermost image is a lense of sediment buried beneath layers of bat guano in Paisley Caves, Oregon USA. In this context the feature is relict - an episode of inwash into the cave that was subsequently buried. In the lowermost image we can see the same process, but this time occuring as a post-depositional feature within a midden at Catalhoyuk, Turkey. Here, the stratified midden deposits have been disturbed relatively recently by animal burrowing, and a period of inwash (probably from rain) has deposited the material within the animal burrow. Judging by the size of the disturbed burrow area, it's a very small rodent of some sort. In A. you can the coarser particles, including bits of microcharcoal etc, B. you can see the material becomes much finer. C. and D. show a seperate episode where loose, coarse particles have fallen into the burrow and landed on top of the water-laid crust.
catalhoyuk micromorphology Paisley Caves water-laid deposits