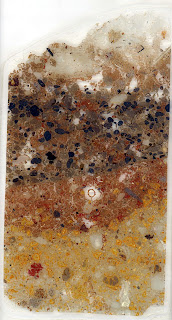 It's about time I say a bit about Qal'at al-Marqab, also known as Margat Castle, Syria. It is the castle for which this blog is named, and looking back over my posts it seems I talk much more about the coprolites than the castles. I visited the site as part of a preliminary assessment into the potential of microarchaeology to investigate activities and use of space at medieval castle sites, back in 2009. I had an amazing time in Syria, working with a joint Syrian-Hungarian team led by Dr Balázs Major from the Pázmány Péter Catholic University. I've been working on the pilot samples on and off since then, but today is the first time I've had a real chance to go through the data in detail. As ever, microscopic analysis is providing fascinating insights into the archaeology that would otherwise be missed. One of my favourite samples is the floor section to the right. Probably one of the most difficult samples I've ever collected, I ended up having to hack the thing out with a screwdriver. Look at those beautiful basalt pebbles! We are carrying out a series of geochemical tests to look at the compositon of the mortars, to see if this varies over time. If so it could be a useful way of testing the identification of different building phases. 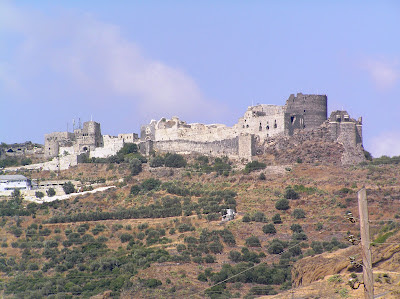 Watching the political troubles unfold in Syria has been very sad; it will be a long time before I am likely to be able return to Margat, not only to continue with the archaeology but to meet up again with the local people who worked with us. One of the best things about working in foreign places is the chance to meet new people. I remember it was quite fun trying to explain what micromorphology is with my limited Arabic skills. I still have my carved shell bearing the name Qal'at al-Marqab, and the CD of Syrian pop music they gave me as a leaving present. More on Syria: Cultural Heritage in Conflict at Current World Archaeology magazine.