- June 25, 2020
As promised, a new post that is actually on geoarchaeology. I never used to be into industrial archaeology. Having grown up in the north east, I always thought the buildings were ugly. The skyline from our house was filled with the cranes of Swan Hunters shipyards, and I remember the siren that used to go off to call people to work. My dad would grab his bait box and walk there, down the path into what is now Segedunum Roman Fort. He likes to tell me the story of how the end of the wall was right outside the cabin where he would sit with his mates on a break. This was all just whatever at the time. I prefered nature - beaches, rocks and trees - to being in the urban landscape. After my dad was made redundant when the Shipyards was closing down for good, the industrial landscape became associated with decline, poverty instead of pride. A reminder that we were poor and lived in an ugly place with ugly old buildings.

I was so happy to move away from that at age 18 when I went to university. Oxford was the exact opposite - a landscape of dreaming spires, immaculate quads (lawns), trees and gardens. Although I still appreciate the beauty of it, I never felt at home there. I always felt like a visitor who didn't quite belong. In the intervening years I've moved and lived all over the UK, and my views have changed completely. How much of that childhood hatred of the industrial landscape was down to internalised resentment of being poor? Now I find the old brick buildings to be truly beautiful. Archaeology has taught me how to read the history in a building, to look for the clues that show how buildings were built, used, modified. I look at the north east urban landscape, and rather than finding it ugly I find it nostalgic. It actually makes me sad for what has been lost from the region, in terms of it's identity, and generations of people like my dad who had all that taken away when those industries disappeared. But I'm also glad that many of the buildings are still there as a reminder of our heritage, repurposed. 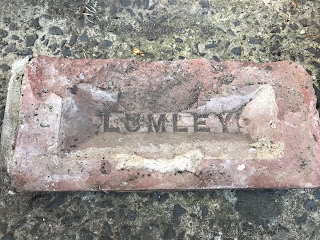 Having finally managed to get a mortgage two years ago, for the first time in my life I've been able to modify and redecorate the place where I live, a 1930s semi detached, and it has been truly fascinating researching how 1930s houses were built, identifying what are original features and what was changed when the previous owners remodelled it in the 1970s. Getting to the point, I have been tidying up the back garden over the past few weeks, and found a cache of old bricks, presumably from the afforementioned 1970s remodelling. Being an archaeologist I of course had to do a bit of research on them, and discovered a whole world of historic brick studies. Did you know that the indents with the stamps are called frogs. So these are frogged bricks! 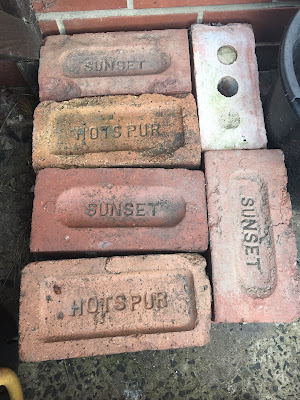 It looks like Hotspur was a brickworks in Backworth, North Tyneside, produced bricks 1930-1945 which fits with date house was built. Sunset was based in Fenham, Newcastle and operated 1921-1967. Lumley brickworks was in Co. Durham and used kilns in Newcastle at one point. I can’t find any info on this particular stamp, the earliest ones from this brickworks have little castles on them! It got me thinking about how my house was so connected to these lost industries. The back garden bricks were mostly an equal mix of Hostpur and Sunset, with only one Lumley. The archaeologist in me wants to know why we have these different brick types - were 1930s houses built using a mix of suppliers? How were they sourced? Or is this to do with repairs at a later date? Did these companies supply just the north east or all of the UK? Sad again that these were all local companies, now gone.

The geoarchaeologist in me wants to know about the materials. Below is an example of bricks from the same company, but the fabric looks different. Different dates perhaps?  How variable were clay mixes and why? Does this impact on how well bricks preserve? One of the replies to my Twitter thread indicated that brick experts can date a building just by the brick colour! I would love to apply a geoarchaeological approach to this, analyse the bricks using the methods that we would apply to prehistoric building materials. It would be a great way of comapring how these methods match up with the historic record! 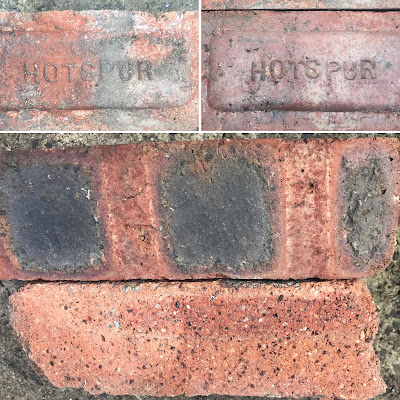