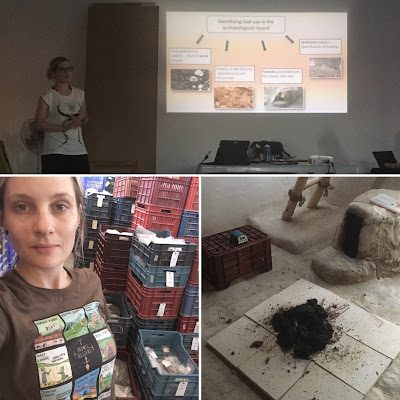 After yesterday's musings I figured I should post about some of the fun archaeological stuff I've been up to at Catalhoyuk this week. The reason we are here this year (we being myself and project postdoc Helen Mackay), is that we were lucky enough to be awarded a grant from the Wellcome Trust. We are collecting archive samples to export for analysis, doing some burning experiments in the reconstructed mudbrick house, and general networking and scouting for collaborators for when we (hopefully!) do the full sale research project.

The focus of the Wellcome project is to investigate the potential relationships between 'biofuel' use and respiratory health in the archaeological record. The materials that people used for fuel in the Neolithic (wood, dung, reeds etc) are being promoted today as sustainable alternatives to fossil fuels, however there has been a lot of research showing that these fuels are actually just as bad for respiratory health as fossil fuels. Biomass burning releases a lot of particulate matter as well as things like carbon monoxide and other things that are bad for you.

Day one on site involved settling in then giving a short seminar presentation to discuss the project and get feedback from team members. Everyone was really interested which is great, and we had some useful discussions about the different research strands, and some suggestions for other areas we could possibly include. Day two we set up the first burning experiment in the experimental house - we are so fortunate to have on-site a reconstructed mudbrick building for testing out ideas like this. With a bit of help from one of the Turkish women we managed to get a good fire going, and set up the particle monitors to measure the particulate matter that is released over the course of a typical burning episode. Today we did repeat experiments using various combinations of wood and animal dung to see how variable the different fuel types are.

Although these are only pilot studies, I am really interested to see the data we are collecting. The experience of running the experiments has also been very useful; we learnt very quickly that the amount of fuel used and the way the fire is constructed seems to have a big impact on the amount of smoke released. In some cases there was so much smoke that we literally could not stay inside the house. In the cases where it was possible to stay inside the house during burning, there was still a noticeable amount of particulate matter in the air, and Helen and I both came out covered in a fine layer of microcharcoal and ash particles!

Chatting with Scott Haddow from the human remains team has also been very useful. Scott is doing a review of the Catalhoyuk ostearchaeological material for the Wellcome project, and reassessing some of the suspected evidence of anthracosis. Although it looks like there are very few individuals with indicators of respiratory disease, this in itself is actually a very interesting observation as it may tell us something about behaviour of people and levels of exposure to irritants. I can't wait to do the full scale study and compare all of this data properly.
biofuels catalhoyuk fieldwork fuel health wellcome