- July 25, 2017
Registrations for DIG2017 closed over the weekend so I've been collating all the information for preparing information packs and confirming catering etc. I've been playing around with the delegate information and thought I would share some fun figures. All the data is based on the registration details provided by the delegates, with designation of male or female from delegate name. The first figure shows the geographic distribution of delegates (residence rather than nationality). We have around 80 people attending from 20 different countries, making DIG2017 truly international! The highest number attending are from the UK, which makes sense given the location this year, but we also have a good number from north america, and a wide spread from across Europe. Our furthest afield is coming from Australia! 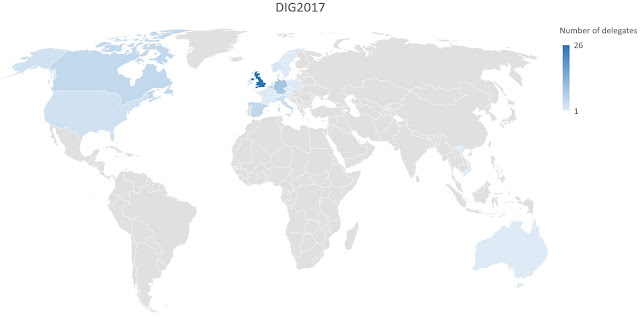 I'm happy to see that we have an almost even split of early career researches/students to established researchers, and a good gender balance of 43% female 31% male. It is interesting that despite the fact geoscience in general tends to be quite male dominated, geoarchaeology seems to have a good balance of women. Whilst the majority of attendees are coming from universities, I'm also really happy to see we have a decent turnout from other sectors including several commercial/CRM companies and government bodies.