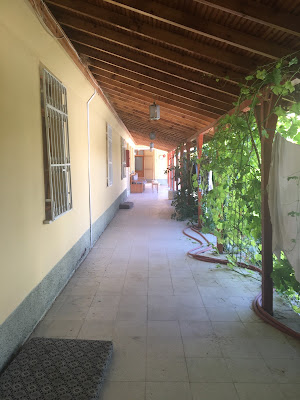 This blog post was supposed to be full of excitement at all the cool samples we've collected and the experiments we have been doing in the reconstructed mudbrick house, but instead I find myself contemplating the institution that is Catalhoyuk. Not Catalhoyuk the Neolithic settlement, but Catalhoyuk the archaeological dig, the community of archaeologists, locals and all the other people who are or have been involved with the project. I don't think I ever fully appreciated what Prof Ian Hodder has achieved here, not until I got my job at Newcastle and realised the time and effort that goes into organising fieldwork, and generating funding for projects. Field seasons that last 2 months, with up to 100 people on site at a time. A dig house with labs and storage. Catering, accommodation, the politics, and of course the archaeology itself.

I always felt like I never quite belonged here; my visits were always timed as the excavation was well underway, and everyone was busy digging in the day, socialising in the evening. Most people spent a great deal longer living and working on site than I did, and it was very hard to jump in and make friends. Everyone else already knew each other and knew the routine, and I felt like I had no clue what was going on. I still owe so much to Shahina Farid, field director  until 2013, who took time out of her busy schedule to help me (and giving me cigarettes in the days before I quit...). The first time I came here was 2004, and by 2012 I was just getting to the point where I felt like I belonged, like I knew what was going on and my research was contributing something. Then the nomadic postdoc years kicked in (including a period where I thought I was going to have to leave academia), and I never had the chance to come back, until this year and the luck of getting Wellcome Trust funding to explore one of the many ideas that I have for this amazing site.

It's a strange feeling being back; at once everything is so familiar yet different. No more shed out the back, the site of themed parties, Efes beer and questionable music. In its place there is a new building that blocks the view of the mound and is a bit too bright inside. It's also very quiet compared to the last time I came here. The atmosphere is more subdued, like everyone is just getting on finishing things, no time or desire for socialising in the evenings. Not that I have ever been great at socialising, but even introvert me was happy sitting in the corner watching the world go by. Now there's not much to watch, though it has been nice to see familiar faces, people who I have become friends with through the shared experience of being a Catalhoyuk team member, and since 2008 consolidating that connection through social media.

Speaking of social media, there is now Wifi on site! In 2012 there was a desktop computer where you could sign up for a timeslot to check emails, very slowly. Back in 2004 there was nothing, not even a mobile phone signal. Yes, I am fully aware I have turned into a middle aged person who is doing the 'back in the old days' cliche. I feel like I've grown up here. Maybe that's another reason it feels strange, being here as a fully fledged academic rather than as a student.

It definitely feels as if things are coming to a close. This is the last year of Prof Ian Hodder's 25 year permit, and everyone knows that we won't be back here next year. I wonder what will happen to all the local people who work in the dig house, or the guy who runs the little shop selling cold drinks and ice cream. And the guards - they always remember me, even when I've been away for 4 years, Mustafa came over to say hello today. 25 years of Catalhoyuk. I'm privileged to have been working here for half that time.
academia catalhoyuk fieldwork