- May 15, 2017
Well, I arrived in Oregon a couple of days ago, trying (without auccess) to get over jet lag before starting firldwork fot the NERC project tomorrow. Before I start with the stream of NERC related posts, a little update on my taphonomic experiment that I posted about back in November. Readers may recall that we came across some recently deceased racoons plus a hawk on the side of the road, and I decided they would make a fine addition to my animal bone reference collection. I set them up in a wire cage to be left to the elements, thinking that when I came back 6 months later they would be in the advanced stages of decay, perhaps even ready to extract and clean up the bones. Nope. 6 months sounds like plenty of time for two medium sized mammals plus one hawk to decay, but I didn't account for the fact that when I deposited them back in November, winter was coming, and they have been buried under two feet of snow for the best part of those 6 months! So, they pretty much look like they did when I left them, except they have deflated, which I guess means that at least the internal organs have decayed. One interesting observation is the newly constructed corvid nest in a juniper tree, suspiciously close to the experimental site, and the fact that the leg of one of the racoons is now sticking outside the wire cage, and the tail is covered in bird poop.
Something else that is quite striking is the change in vegetation. I usually visit Oregon either in November, or later in the summer. I don't think I've ever been in May, and it is so much greener than I am used to. After this field season it's unlikely I'll be back in Oregon until next year, so I'm hoping that summer will accelerate the decay process. Hopefully those sneaky corvids won't find a way to get them out of the cage! 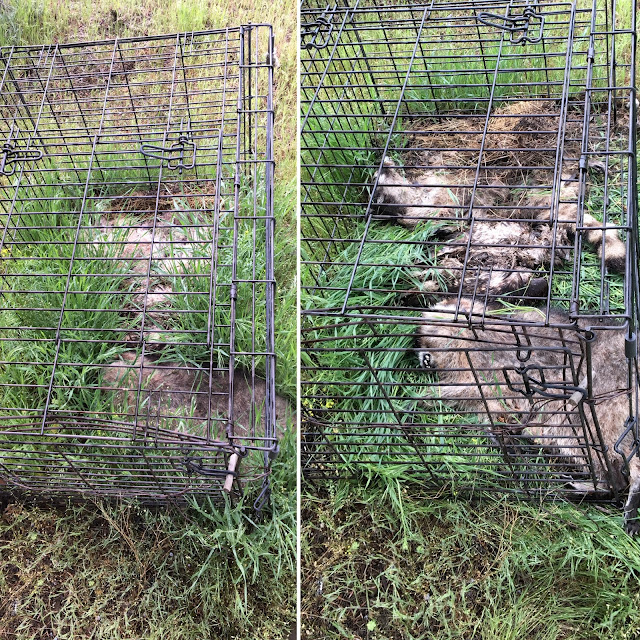