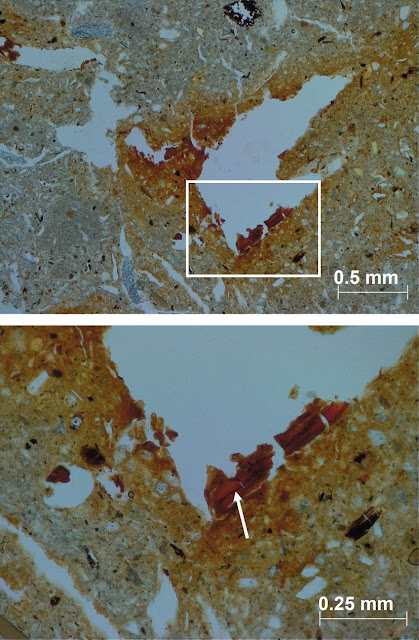 As a micromorphologist something that you begin to notice quite quickly is that plant remains come in a huge variety of forms. Whilst at the macroscale we usually think about charred remains - wood charcoal, burnt seeds and grains - at the microscale there is a whole world of other plant remains. Phytoliths and other microfossils are something I talk about quite a lot in this blog, and these are becoming a standard form of 'plant evidence' alongside plant macros. More unusual are pseudomorphic voids, plant remains that are no longer there! I have talked about these a lot in previous posts, basically they are 'impressions' of plants that have since decayed. The micrographs below show something a bit in between. The plants haven't fully decayed, as they were partially desiccated. The orange colour you can see is where the organic matter from the plant has stained the calcareous aggregate (probably some sort of architectural material). In the voids you can see remains of the plant tissue, some sort of grass presumably being used as a 'temper'. This sample is from the Neolithic settlement of Kamiltepe in Azerbaijan, where summer temperatures often exceed 40 degrees.