Microfossil of the Month: Fragile phytoliths

- August 18, 2015
I promise brand new images will be coming soon, but for now here is a micrograph from my old files, this time from my work with the Central Zagros Archaeological Project back in 2010, and is from ashy deposits in an external area at the Neolithic site of Sheik e Abad in Iran. This is a great example of a conjoined phytolith that is not particularly well silicified and/or has suffered erosion. The pattern of the cells is not very distinct, and quite 'faint', though you can just about make out the wave pattern of the long cells in places. For comparison, see this example of well-silicifed wheat phytoliths from Catalhoyuk, and this reference specimen of Setaria italica, both of which have very distinctive and well defined cell morphologies. The reason I chose this micrograph is that it is a very good example of how fragile phytoliths are. Despite being composed of silica, which is pretty resistant to decay, phytoliths are physically quite fragile. Think of it like glass - it is very hard and strong, but also brittle especially when it is thin. Phytoliths are microscopically thin, and break very easily. In this photo you can see the 'cracks' that have formed, probably from the process of mounting it on a microscope slide and pressing down on the coverslip. The reason I suggest this is 'in situ' breakage on the slide is because the broken pieces are still in contact with each other, like pieces of a jigsaw. If the breakage had occured earlier, either during deposition or sampling, we would not expect to see all the pieces together like this. It makes me think about how we actually count phytoliths - what are we actually counting? How does the sum of individual cells (usually 300-800 are counted) relate to a quantity of actual plants (one plant contains hundreds of thousands of cells)? In this example, should the phytolith be counted as 'one' conjoined fragment, or should we count each of the broken pieces separately? 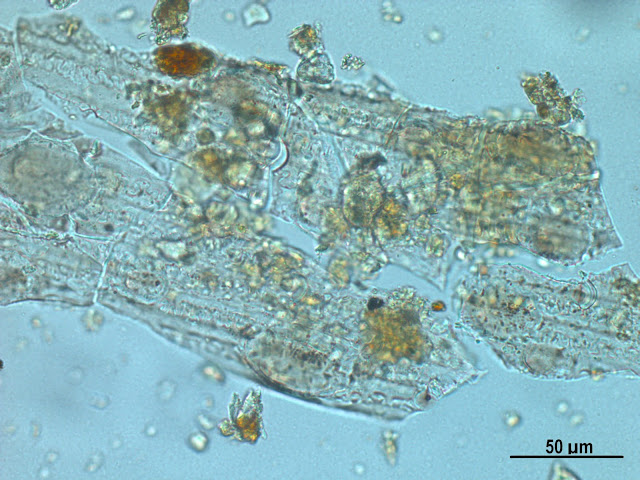