Geoarchaeological Adventures Across the US Part 2: Chaco Canyon, New Mexico

Following on from my post a couple of weeks ago, here is another snippet of geoarchaeological observations from my recent road trip across the US. As I mentioned in the previous blog, the coast to coast trip was a great chance to observe the gradual changes in geology, vegetation and climate that happen across the continent, and how these link with the archaeological preservation. In the humid subtropical climate of the Florida pan-handle we saw a lot of water action and salt precipitation occurring at Fort Pickens, with relatively degraded brick structures that are only around 180 years old. The contrast in New Mexico is significant. The climate here is semi arid to arid, and the preservation of the brick structures (about 1000 years older than those at Fort Pickens) in the Chaco Culture National Park is fantastic. However we do still see other types of weathering occurring. Whereas most people would be taking pictures of the fantastic structures (actually, I did that too...), I was taking pictures of different types of honeycomb weathering. This is a type of salt weathering that occurs on sandstones and other rock types under certain conditions, requiring a combination of wind and salt exposure. Salt is deposited on the rock surface by wind, and when the moisture evaporates the salt crystallises within the pore spaces, causing the grains within the sandstone to disaggregate. Repetition of the wetting and drying process causes the pores to gradually become larger, creating rock cavities of varying size which are called tafoni. 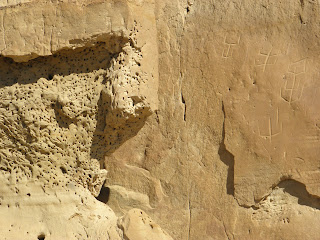 Although the majority of the buildings at Chaco are made of sandstone bricks, there are only certain areas where the process seems to occur, and it also occurs on different scales. I am guessing this has something to do with the level of wind exposure. The photographs below show a few examples of this type of weathering near Pueblo Bonito, the largest of the housing complexes in Chaco Canyon.

For more on honeycomb weathering including a great bibliography check out this website: http://www.tafoni.com/Bibliography.html 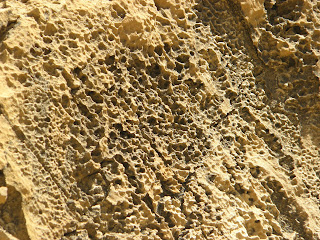 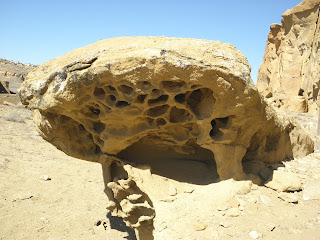