Micrograph of the Month - Glauconite Grains 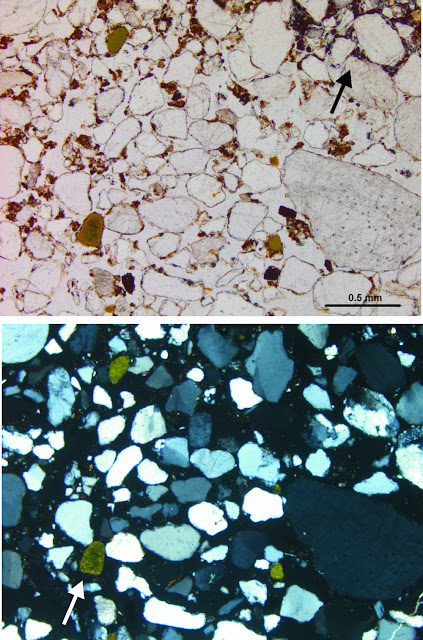 I've been working on and off on these samples from Biała Góra (Poland) as part of the Ecology of Crusading project. We collected them back in June 2011 along with a coring transect survey to assess the nature and extent of the 'cultural layer' at the site. It's a very shallow deposit containing lots of broken ceramics and animal bones etc. The sediment itself looks similar to 'dark earth' deposits in the field, of which there have been many micromorphology studies, largely led in the UK by Dr Richard MacPhail.

The micrograph shows the lowermost 'natural' deposits (upper in PPL and lower in XPL), which consist of a silty sand deposit which becomes coarser further down the profile. The pretty greenish grains are glauconite, an iron potassium silicate mineral, which is thought to be indicative of a marine depositional environment. They can be seen especially clearly in XPL in the lower image.

The geology is this part of Poland (as I found out after many hours of searching through obscure journals) consists of fluvio-glacial Pleistocene sediments associated with the Vistula River. But as you can see in the upper micrograph, there is some fine organic material clustering between some of the sand grains. This is the beginning of the upper unit, where the abundance of organic material and degraded anthropogenic inclusions increases dramatically. It is these components of the deposit that give it the 'dark' colour, compared to the bright yellow of the underlying sands. For more info on Biała Góra check out the 2011 project gallery article in Antiquity.