A day in the life of a maritime archaeologist

Despite having similar theoretical backgrounds, it is obviously clear that the methods and technologies used in maritime archaeology differ drastically from terrestrial research. Though volumes have been written on my particular discipline, I wanted to present a more personal and perhaps more accessible example of what life on the water is truly like. 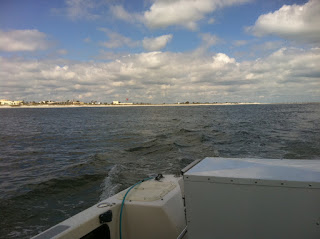 As with any field archaeological project our day starts early, typically before sunrise. We usually rise somewhere around  5 am and prepare for the day. We arrive at the local marina where our survey vessel is currently stowed, in this particular case we have the luxury of keeping the vessel in the water and don’t have to launch and recover it on a daily basis. Supplies are refilled, boat engines are checked and the equipment is prepped. For the current survey we are utilizing a side-scan sonar and magnetometer, supported by an echo-sounder to gather bathymetric data (water depth, etc.). The side-scan sonar and magnetometer are housed in “towfishes”, or instruments that are towed behind or off the side of the survey vessel. The echo-sounder is mounted to the vessel so the only equipment that needs to prepped and tested are the remote sensing towfishes. 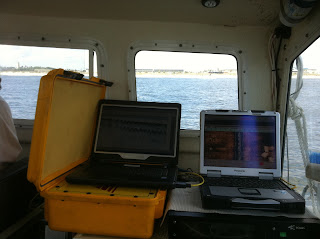 Once all equipment is tested and prepared we make the trek some 20 miles offshore to begin the day’s survey. The journey takes around an hour depending on the weather. Once on site, the equipment is deployed off the stern of the vessel and all lines secured. Once satisfied that the equipment is stable and recording accurate data we begin the bulk of the day’s activity, driving lines or “mowing the lawn”, which simply consists of piloting the vessel in parallel transect spaced an equidistance apart over the entire portion of the previously identified survey area. Both data outputs can be observed in real time but any real analysis is done after processing. On this particular day we are accompanied by a pod of dolphins which are often attracted to the survey vessel. Presumably they are entertained by the sonar pings as they seem to be particularly attracted to it, in some cases masking the data altogether.

Survey time on the water is only limited by weather conditions and available sunlight (or in poorly planned excursions, gas levels). On this particular day, we are able to survey for a solid 10 hours and return to land in time to refuel the vessel, stow the equipment, and refill any depleted supplies. Once back in hotel/house/condo the data is processed, food is cooked, weather predictions for the following day consulted, and a cold beer consumed. Ah the life of survey on the water.