- May 31, 2012
To most people, recieving a box of excrement in the post would probably be quite a distressing experience, and  a sign that you had aquired a pretty extreme stalker and/or a critic who really disagreed with that paper you published. For me however, such an occassion tends to be a cause of excitement, and has happened  not once but twice so far this year. Today's offering of poop is in the form of thin section micromorphology slides from Paisley Caves, Oregon. I have been waiting on these rather nifty samples for about a year now, due to the slow process firstly of exporting them, then having them turned into thin sections. But it was worth the wait. Paisley Caves is famous for its poop, being the site of the earliest human DNA in North America, recovered from a coprolite. My poop is not quite as exciting, consisting largely of tiny little bat pellets that form layers between (hopefully) anthropogenic features such as ash layers from hearths. Though a first glance suggests there may be some omnivore poop in there as well.

Those with keen eyes (and a knowledge of micromorphology) may also notice the slide to the left - more from Çatalhöyük., possibly one of the most extensively studied sites in terms of microarchaeology. A set of samples was collected a couple of seasons ago to identify whether this feature is a large pit with multiple phases of relining. Hopefully the samples will shed light not only on the construction and formation processes of the feature, but also what types of products may have been stored in it. Hopefully not poop, though this wouldn't come as a huge suprise considering the stuff is quite abundant in the middens at Çatalhöyük. 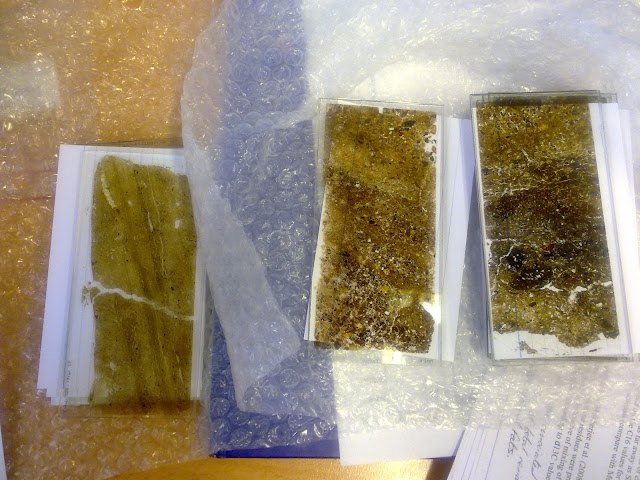 The slides are of fantastic quality, and again I'd highly recommend Earthslides.com to anyone.
catalhoyuk coprolites micromorphology neolithic Paisley Caves