Seminar at the Lithuanian Embassy

- February 01, 2012
Just on the train back from London to York this morning (hurray Grand Central free wifi!), after attending a seminar yesterday evening for the Ecology of Crusading project, at the Lithuanian embassy. This is the second embassy seminar I've been able to attend, the first being around this time last year at the Estonian embassy. It is always really interesting to attend these events as you get to meet such a wide range of people, many of whom have interesting stories to tell. As someone who loves to travel, I like meeting people from around the world, and people from the UK who have lived abroad in unusual places. Yesterday we met some people who had worked in the diplomatic service and had lived and worked all over the Baltic and Caucasus regions.

The Ecology of Crusading project is in its second year now, and although I am not officially working on it until later this year, I haven't been able to resist taking a quick peek at some of the samples - I'm presenting some of the initial results at the SAA (Society for American Archaeology) conference in April so I'll give an update around then. Although it is quite different geographically and temporally to much of my previous research, some of the questions we are investigating are similar, particularly with regards to the human interaction with and use of the environment. From a methodological point of view, this project is providing some great comparative material for looking at midden formation processes, and the survival of organic residues in different environments.

The project is directed by PI Dr Aleks Pluskowski (below, on the left) and there is a whole team of postdocs working on various archaeological and historical materials. I am developing and coordinating the geoarchaeological work, which involves a lot of on-site micromorphology and geochemical analysis, as well as off-site geochemical analysis of lake cores and peat cores, in conjunction with Dr Alex Brown, the project palaeobotanist. Hopefully I will also doing some more ceramic residue work, to compare the evidence for changes in diet between the indigenous Iron Age and incoming Medieval populations. There are already some possible changes according to the preliminary zooarchaeological data, so it will be interesting to see if a similar pattern can be seen in the way pottery is being used. 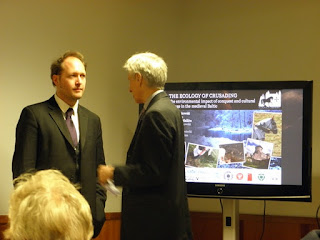 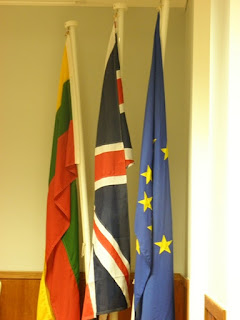