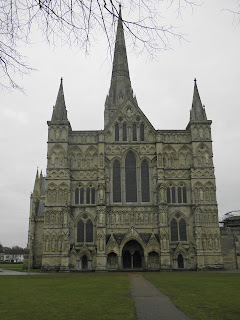 To continue the alliterative theme of the blog, this sums up nicely in 3 words my sampling visit to the Salisbury and Wiltshire Museum yesterday. The museum houses the collection of pottery from the 1967 excavations at Durrington Walls by Wainwright, which we will be using for comparison with the pottery being analysed from the Stonehenge Riverside Project. I was pleasantly suprised to see how pretty the city is - a little bit like York with random medieval buildings and bits of medieval wall dotted around the centre, and also an impressive cathedral. Maybe not quite as pretty as York Minster, but not too bad :) The cathedral is right next the the museum, though alas I didn't get a chance to look around as I had a rather large box of pottery to carry around by that point.

The museum itself was rather exciting. The collections of archive material are located in a very chilly old store room complete with strangely labelled Victorian draws containing Antiquarian curiosities. It was all very Lovecraftian....the scientist sat huddled amongst the boxes of ancient bones and curious stone objects in the vaults of the Miskatonic University, relics of some long forgotten culture, shivering in the chill mist. Her fingers became increasingly numb and she sorted through the fragments of ceramic artefacts, decorated with strange grooved motifs that seemed to hold such a mesmerising power over so many of her colleagues. It felt almost as if she was being watched...

Then I noticed  the miscellaneous draw of dog skulls.


Somehow I managed to come back with almost twice the number of pottery sherds that I thought I was supposed to collect. I guess you can never have too many pottery samples? Maybe. Hopefully this will at least mean that we get a reasonable hit rate for identifiable residues. I am slightly concerned that a lot of them appeared to have been 'conserved' at some point with a coating of varnish, and glued together with UHU. I'll be anticipating some interesting peaks on the GC. 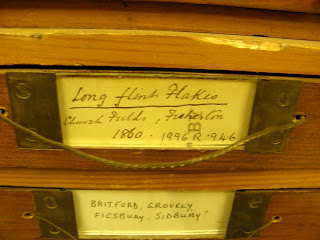